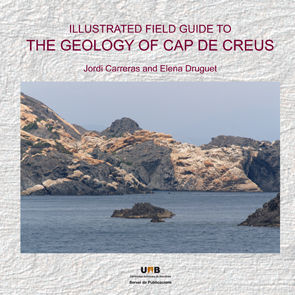 THE GEOLOGY OF CAP DE CREUS

Cap de Creus is a paradigm of Geological Heritage. Located in the NE part of the Iberian peninsula, it represents the easternmost outcrops of the Pyrenees. The Cap de Creus forms a peninsula in the Mediterranean and contains the most singular landscapes of the Costa Brava. Geological, biological and historical-cultural elements converge on the Cap de Creus peninsula to shape a site of great scientific and landscape value. The outstanding character of this site is mostly achieved from its geological configuration and from the Mediterranean clime, which is here extremely windy (tramuntana), giving rise to many spectacular landforms and beautiful rocky coasts. Moreover, the main heritage value of this area concerns the quality and quantity of geological outcrops that enable the understanding of geological processes far beyond their regional interest. The dawn of the Cap de Creus geological research can be placed in the early seventies. Previous works were rather scarce and lacked a global approach to the main geological features of the region. Some references on minerals and rocks from the Cap de Creus area appear in general treatises and compilations (CalderÃ³n, 1910; San Miguel de la CÃ¡mara 1936) and later specific works on a transformist interpretation of the origin of pegmatites and Port gneisses (Denaeyer, 1947 and Denaeyer and San Miguel, 1954) and on the basic geology of the area (CaÃ±ada, 1964). In the early seventies, Jordi Carreras thesis on the general structural and metamorphic trends of the area and his later M.Sc. research on shear zones and mylonites can be regarded as a milestone for the Cap de Creus geology. Nowadays, and after 40 years of research, this area has become a worldwide reference place for structural geology. The main reason for this is the exceptional quality of outcrops and structures exposed. This fact, together with that in the nineties the Cap de Creus stood as one of the unique landscapes preserved in the Catalan coast, lead the Catalan Government to protect vast areas of the Cap de Creus Peninsula, designating the Cap de Creus Natural Park. This has been essential to avoid the landscape and outcrop destruction due to the rampant urbanization that took place since the sixties elsewhere along the eastern Spanish coast. However, some spectacular geological outcrops are located in areas that suffered from uncontrolled touristic development. This is the case of the Roses lighthouse area, which, to make matters worse, was not later included in the Cap de Creus Natural Park because of its closeness to urban areas. The geological value of the Cap de Creus area lies on the fact that it displays a great variety of key structures. Most of the exposed structures are self-explanatory and there is no need for speculation or extrapolations. The relevance of the Geology of the Cap de Creus was first disseminated internationally in 1979 with the International Conference on Shear Zones in Rocks (the 3rd precursor of the present-day DRT meetings). From Catalan universities, Pere Santanach, Vicente Morales, Joan Manel Orta, Mariona Losantos, Joan (RamÃ­rez) Palau, Josep Maria Casas, Amparo GarcÃ­a-Celma and Felip OrtuÃ±o joined the research in Cap de Creus. In the early nineties Elena Druguet started her research in the area that continues nowadays. Albert Griera also did his Ph.D. thesis in this area. Many foreign researchers have visited the region, some of them being involved in research. Among them, Stan White and Carol Simpson were the first to collaborate with Jordi. Later, Gerard BossiÃ¨re, Donny Hutton, Cees Passchier, Pia Victor, Paul Bons, Ian Alsop, Peter Hudleston, Dyanna Czeck and Isadora Mariani have collaborated with the MIET research group. Others, like Sandra Piazolo and Florian Fusseis, impressed by the suitability of the structures, also performed their investigations here.