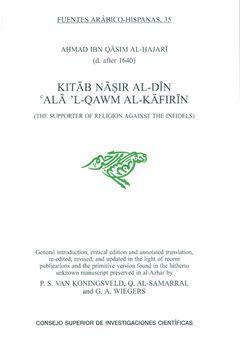 PREFACE TO THE SECOND EDITION.- GENERAL INTRODUCTION.- TRANSLATION.- Introduction. 1. Granada and the lead book affair.- 2. About my arrival in the country of the Muslims and the events during my departure from the Christians.- 3. How I came to the city of Marrakesh and why I went to France.- 4. My arrival in France.- 5. My arrival in Paris.- 6. My arrival before the judge of the Andalusians in France with the letter of the Sultan.- 7. My return to Paris and what happened to me there.- 8. My arrival in Olonne and, afterwards, in the city of Bordeaux.- 9. My arrival in the city of Bordeaux and the discussions I had there.- 10. The discussions with the Jews in France and the Netherlands.- 11. About the Netherlands.- 12. What happened to me in Egypt with the learned Monk.- 13. Relating the graces God bestowed upon me in al-Andalus and elsewhere.- APPENDIX ONE.- APPENDIX TWO.- BIBLIOGRAPHY.- ABBREVIATIONS.- INDEX.

Al-Hajari's "Kitab Nasir al-Din ala l-qawm al-kafirin" is a unique eyewitness-report in more than one respect. First of all, it is a primary source for the social and cultural history of Spain's late 16th-century crypto-Muslims, the Moriscos, and their later vicissitudes in North Africa after the expulsion. Secondly, it provides many otherwise unknown data concerning the contacts between the Muslim world, especially North Africa, and Western Europe during the early decades of the 17th century. In the third place, it provides in great detail the view a Muslim scholar of Spanish extraction had of several West-European societies (especially France and the Netherlands), including their social habits and religious convictions. This view is based on direct observations and personal contacts with many outstanding personalities. In the fourth place, it stands out as an original piece of Islamic-Christian polemic. Finally, the work is an important source for the history of the spoken language of North Africa, in particular among the diaspora Moriscos.